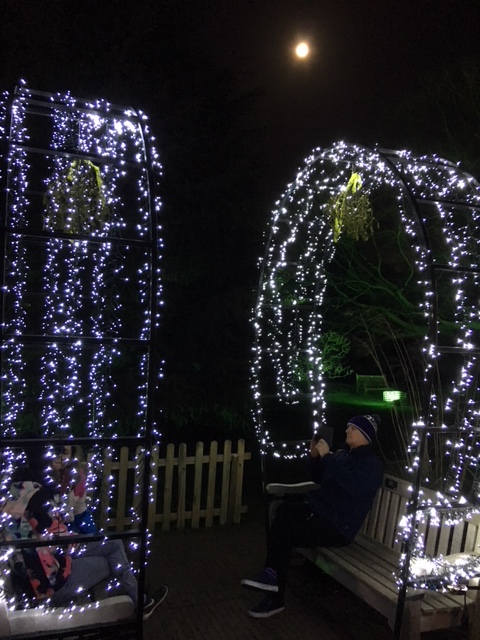 Being the 2nd Full Moon in the calendar month of March, by the newer definitions it is a Blue Moon.

By the same definition there was another Blue Moon two months ago when we had Full Moons on the 2nd (image showing Full Moon over Kew Gardens is on the right) and 31st January. A Synodic Month (the time between two Full Moons) is 29.53 days on average, so it's more usual to have one per month, but if the month is long and there is a full moon at the very beginning (as happened this January and March) then we get two. The next Blue Moon by this definition will be in 2020!  It's rare to get two Blue Moons in the same calendar year; it last happened in 1999 and will next happen in 2037!

February did not have a Full Moon at all, making it a Black Moon month, although confusingly this can also refer to the 2nd New Moon in a calendar month or a month with no New Moon!  February is the only month when this can happen, especially in years when it only has 28 days.

Because Blue Moons (by either definition) are unusual - the last one before the 31st January this year was 31st July 2015 - the expression 'once in a blue moon' has come to mean something happening on rare occasions.  The moon can in fact appear blue in colour too, when the atmosphere is filled with smoke or dust particles of wider than 0.7 micron, which sometimes happens after a forest fire, volcanic eruption (such as Krakatoa, Indonesia in 1883) or dust storms.

The Celts had names for each Full Moon of the year, this is the Alder Moon.  At this time of year the Alder is prominent and flourishing on the river banks, with its roots dipping in the water, offering itself up as a magical bridge between heaven and earth. Known as Fearn (pronounced Faerin) it is associated with Faerie Magic; an ideal time for spiritual decision-making relating to divination and prophesy, as well as for honing our intuitive skills. Alder twigs and flowers are well known charms in Faerie Lore, with Alder shoots being used to make whistles and flutes to commune with the air elementals. More about this at the Celtic Weirdness website I happily stumbled upon. Being very close to the Equinox, the Alder Moon will carry the frequency of balance and harmony embodied by the Equinox when light and dark are in perfect balance.  Interestingly, this is also the remit of Cassiel, who is the Angelic Guardian of Saturday, and as this Full Moon falls on a Saturday we can expect this to boost the harmonising effect.

As it's Easter this weekend too, this moon will carry the energy of the Pagan Deity Eostre (the ancient Pagan ceremony upon which I believe the Easter celebration was superimposed, see my post for Easter Sunday for more); representing fertility and associated with the Pagan Hare, another ancient symbol of fertility and with a 28 day gestation period very linked to the lunar cycle. In Ancient Egypt the hare is a hieroglyph meaning ‘existence’.

See my Facebook Live on Saturday 31st March is the Equinox Easter Alder Blue Full Moon (featuring the energies of this particular Full Moon event plus instructions on Oil Pulling and Angela McGerr's Angelic Meditation with Gabriel). Plus, if you're interested, 'Has Easter been superimposed onto an earlier Pagan celebration Eostre?'