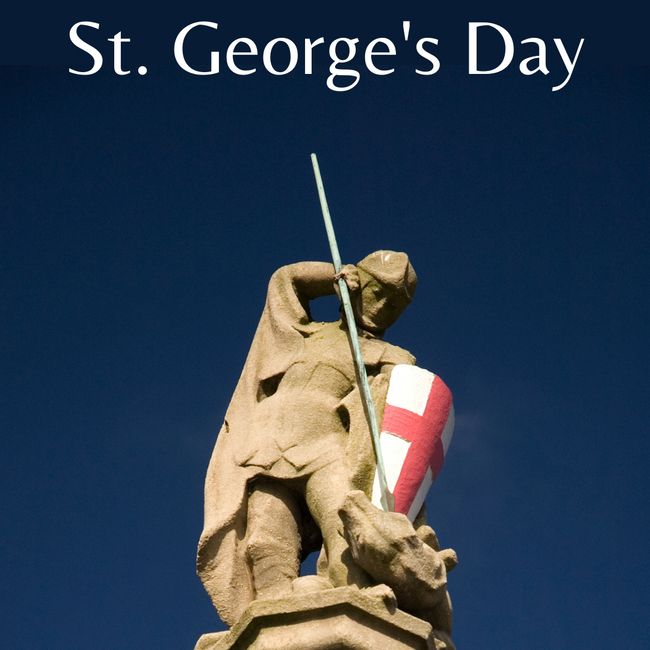 Saturday 23rd April is St George’s Day in England, celebrating St George, England's patron saint. The anniversary of his death, which is on April 23rd, is seen as England's national day.

According to legend, he was a soldier in the Roman army who killed a dragon and saved a princess.  The flag of England is the red Cross of St. George, and this is widely displayed as a symbol of national identity.

Surprisingly, 23rd April is not a Bank Holiday.

William Shakespeare - long revered as Britain's, if not the world's, best known author and playwright, also died on 23rd April, but in 1616, in Stratford-upon-Avon, making this the 405th Anniversary.

He was Baptised in Stratford on the 26th April 1564 and his birth date is not known but it is traditionally observed on 23rd April, Saint George's Day, indicating that he would have died on his birthday.

This date, which can be traced back to an 18th-century scholar's mistake, has proved appealing to biographers, it being considered somewhat poetic that he died on his 42nd birthday.

Shakespeare has 37 plays and 154 sonnets credited to him, but we don't really know whether he actually wrote them, or was just a merchant, land owner and occasional actor who either brokered the plays or was prepared to be acknowledged as the author to protect anonymity of those truly responsible.

Certainly writing plays could be dangerous as any plot seen to reflect a political plot not appreciated by the Queen/King could be interpreted as treason.

Many scholars argue, quite reasonably, that proof of Shakespeare’s authorship is largely circumstantial and sketchy at best; certainly he was better known in Stratford as a businessman [one documented view is that he brokered the plays] and not a playwright.

Celebratiing national and cultural heroes is a great way of uniting communities, bringing harmony into their lives.

Through Harmony Healing, Joanna offers a wide spectrum of events designed to nurture your welbeing and to connect with nature and the moon cycle. We hold monthly Full Moon Guided Healing Meditations, £20. Book at the Harmony Shop.

Harmony Healing utilises the philosophies of the Ancient Egyptians, in the form of Reyad Sekh Em (RSE) Level 1 Egyptian Alchemy Healing. Featuring four online modules of Khemitology (Ancient Egyptology according to the indigenous oral traditions), Violet Flame of Amenti, Mindful Chakra Balancing & Essene Angelology.Missed sessions are fully recorded so that late registrations or are possible. Reyad Sekh Em (RSE) Level 1 costs £266 and run about three times a year. the individual modules are stand-alone and cost either £88 or £66, hence the RSE 1 package offers a cost saving.

To receive regular Blog updates (headed with a title detailing the occasion or event so that you can choose whether to open it or not), featuring New and Full Moon, meteor showers, eclipses and other meteorological events, interesting anniversaries, ancient festival dates plus notification of dates of numerological significance, sign up for the Harmony Healing e-newsletters above or at the top of any page of this Harmony Healing website. The nature of the Blog means that whenever there are several key dates in close succession, there will be frequent mailings. The sender e-mail address is  (and the sender will show as Joanna Bristow-Watkins @ Harmony Healing).