What's the Big Deal With Metaphors? What Metaphors Reveal About You.

As someone who likes Etymology – the study of the origin of words – I’ve always striven for a wider vocabulary.  As such, I listen carefully to people, and it is apparent that a person’s choice of words in everyday conversation is coloured by their interests, educational background, profession, beliefs and even state of mind at the time.  Pilots talk of navigating their way around a problem, projects taking off, contracts landing, taking flight from a situation etc. Rally drivers refer to racing out to the shops, a poor quality product being a heap of rusted metal, a difficult route to success being a rough road. Chefs pepper their conversation with talk of sweetening a situation in their life or news being a bitter pill to swallow.  Yet most of us know what they mean because our mind is able to decipher the comparison into a meaningful statement; somehow we are able to translate the general understanding to the relevant context.  As a result all of the above examples of metaphors, although they may have originated from the stated professions, are now used by people from all backgrounds and occupations.

Metaphor is how the Unconscious relates to and expresses reality. It is a method of using language to bridge from one way of understanding to an alternative. Metaphors can provide a bridge between one familiar item and another. We state that we are "drowning at work," bridging between the idea of being unable to cope in water and the idea of being unable to cope at work. Similarly we may refer to being ‘out of depth’ in a work situation yet we realise this doesn’t mean that we are wading through a pile of paperwork that is literally taller than us!  In a therapy situation, we might observe that this phrase ‘out of depth’ is dropped into the conversation casually, maybe even with reference to someone else, but the clue is there to the active listener that the client’s unconscious mind is dropping us a hint that this description is apt for his or her work or home life.  It will take a little detective work on our side to determine which.

However, metaphors are not just a feature of our spoken language. We also use metaphors, both consciously and unconsciously, every day in our non-verbal communication through gesticulations, movements and behaviour. We don’t realise what pointers they are giving to outsiders about ourselves. We can learn to 'listen out for' and 'read' these metaphors to glean insights about our clients and colleagues.  They can even be expressed in our manifestation of ailments; shoulder pain can represent difficulties with ‘shouldering’ responsibility and joint pains can indicate an issue with flexibility.  Louise Hay was one of the first to document this back in the 1970’s with her book ‘You Can heal Your Body’, which is still in print.  Louise, who died last year aged 90, identified links between a host of health conditions with specified emotional causes and went on to suggest ‘affirmations’ to help alleviate them. Whilst Louise’s work has produced many loyal fans, she is not universally applauded as some feel that her interpretation of all ills being created by our own inner turmoil somewhat simplistic and patronising.

However, professional bodies do concur that metaphors play a key role in uncovering suppressed emotions.

“Over the past 30+ years, it has become clear that metaphor is not simply a literary phenomenon; metaphorical thinking underlies the way we make sense of the world conceptually. It governs how we think and how we talk about our day-to-day lives.” …
Researchers at the School of Critical Studies, Glasgow University.

"The ‘metaphor transfer effect’ undoubtedly affects our feelings".
The Journal of Personality and Social Psychology.

Last October, an advert for a ‘Random Dialogues’ Meet-up caught my eye. I was intrigued and decided to go along to meet the hosts Arthur Partridge (Aypee) and Jane Tyson.

Aypee quickly established that we both used metaphors extensively in our work, helping us to determine underlying explanations for our client’s behavioural and/or physical manifestations.  It’s certainly a technique well known in the fields of counselling and psychotherapy, where stories are often used to illustrate an explanation, both by the client and practitioner.  A client who finds it hard to verbalise how they feel might find it easy to say ‘life is an uphill struggle’ telling us instantly that they lack strength, energy and/or stamina and that they are finding it difficult to cope. It’s also indicating that they feel ‘low’ compared to others.

Since a slumped body posture is likely when people feel sad, metaphors relating depression to a burden are common.  Interestingly even the word ‘depression’ is itself a metaphor as it is derived from the Latin deprimere, translating as “to press down,” indicating the suppressing of emotions.

Aypee’s many qualifications included being a Metaphors of Movement Practitioner, which he had studied with Andrew T Austin. Aypee explained how when he was coaching he used the positioning of events and situations in his client’s mind to determine all sorts of metaphors which he could apply to his/her coaching journey.

In contrast, I discussed with Aypee how I used Past Life ‘glimpses’ and symbolic images which came to mind when I energetically ‘tuned into’ a client, to create metaphors which I could apply to his/her healing journey.

So Aypee suggested that we joined forces on a joint Metaphor workshop.  It was agreed that we should collaborate on an event and promote it via Harmony Healing and Random Dialogues. 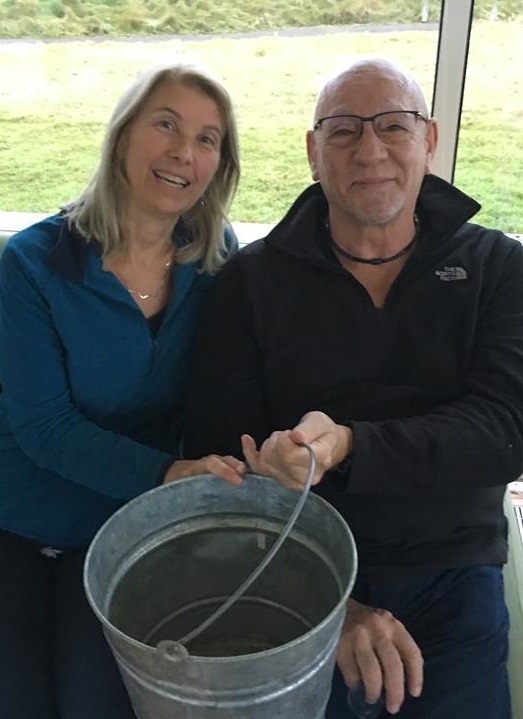 On 21st December, we met up at an early morning Winter Solstice celebration at the Clandon Wood Nature reserve and decided to take some photos together for our event.

Our friend Annette asked us to pose and noticed that a metal bucket was very close to our feet, she remarked “Mind you don’t kick the bucket, Aypee”, to which he laughed and suggested that we embrace the bucket and bring it into the picture.  We did.  The next day I started promoting the event on social media, using the picture with the by-lines “Is your life beyond the pail” and “Have you got any bad habits which you need to kick the bucket?”  As I was sharing the posts, an SOS from Jane alerted me to an emergency, and when I called her, she relayed the shocking news that Aypee had just suffered a fatal heart attack.  Obviously, I instantly withdrew the photo campaign and workshop promotion.

As time passed, in consultation with Jane, we began to realise that this bizarre photo synchronicity could have been Aypee’s final cosmic joke to leave his epitaph in the form of a metaphor.  It also felt like a strong message from ‘beyond the grave’ that the workshop should go ahead because metaphors are not to be underrated.

My friend and colleague Geoff Rolls immediately came to mind as my new collaborator as he had known Aypee for many years and was a fellow metaphor practitioner and enthusiast.  He was more than willing to share knowledge that can help us on a daily basis, when we observe, listen and witness more around us.

Here’s what Geoff had to say about the use of metaphors as a life tool:

Storytelling and use of metaphors allow us to explain complex subjects relatively easily. This is because when we tell stories people’s defences drop, maybe they metaphorically “take off their armour,” making is easier for us to connect and communicate efficiently.

Have you ever seen the wonder on a child’s face when you begin to read or recite a story to them? Often they relax, their breathing slows down, the pupils dilate and they begin to play out the story in their own mind, giving characters qualities that maybe have never been there.

Metaphor has been used by generations to convey messages, to reframe situations that may have been difficult and to learn from others’ pursuits to indicate simple ways of growing and developing.

Metaphor is so powerful that actually uttering certain words, phrases and sentences have a dynamic effect on people’s minds and bodies. Within Touch for Health Kinesiology we can recognise the shifting of muscle integrity when considering a new concept, or even focusing on the function of part of the body. The promotion of an altered state can be hugely beneficial and if we learn to speak on purpose, by using metaphor, maybe we can easily promote manageable and enjoyable change.

Metaphors make it possible to:

Together, Geoff and I will show how to use metaphor in therapies, coaching and healing to quickly and easily improve life for our clients. Furthermore, this skill can be implemented in our daily life to improve our interaction with others.

Article by Joanna Bristow-Watkis with input from Geoff Rolls, April 2018

We are offering our first workshop on Sunday 29th April, 10am – 4pm at the Hoebridge Golf Club, Woking Surrey, GU22 8JH.  Cost is £75.  This will be an eye-opening (there's a great metaphor), collaborative and fun workshop which will enable you to communicate with others more effectively.

To enable us to maximise our personalised interaction with the participants, thus sharing tools for each attendee to use in the future, we are offering this pioneering workshop to no more than 10 people. See Harmony Healing Training for details and to book you place.

Here are a couple of Videos we've made looking at 'what the metaphors you use tell others about you'. It's especially useful for therapists but actually the skills discussed are transferable to business and home use too. The videos are 7.5 & 11.5 mins long respectively.

1/. You Tube/Linked In video, featuring how alchemy metaphors can be applied in a corporate setting.
2/. Facebook live from Monday 23rd April 2018, which discusses some metaphors which have come up in our therapy work, pinned to the top of Joanna's Harmony Healing Facebook Page.