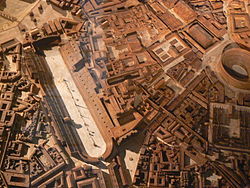 Sunday 21st August is the Roman Festival of Consualia, to honour Consus, the god of counsel, and the one who protects the harvest, which was in storage at the time of the festival.  Mars, as a protector of the harvest, was also honoured on this day, as were the Lares, the household Gods that individual families held sacred.  During the celebration horses, mules, and assess were exempted from all labour, and were led through the streets adorned with garlands and flowers. Chariot races were held this day in the Circus Maximus, which included an odd race in which chariots were pulled by mules.

Image, taken from the Wikipedia entry for Circus Maximus, shows a model of Rome in the 4th century AD by Paul Bigot. The Circus lies between the Aventine (left) and Palatine (right); the oval structure near the top right is the Colosseum.