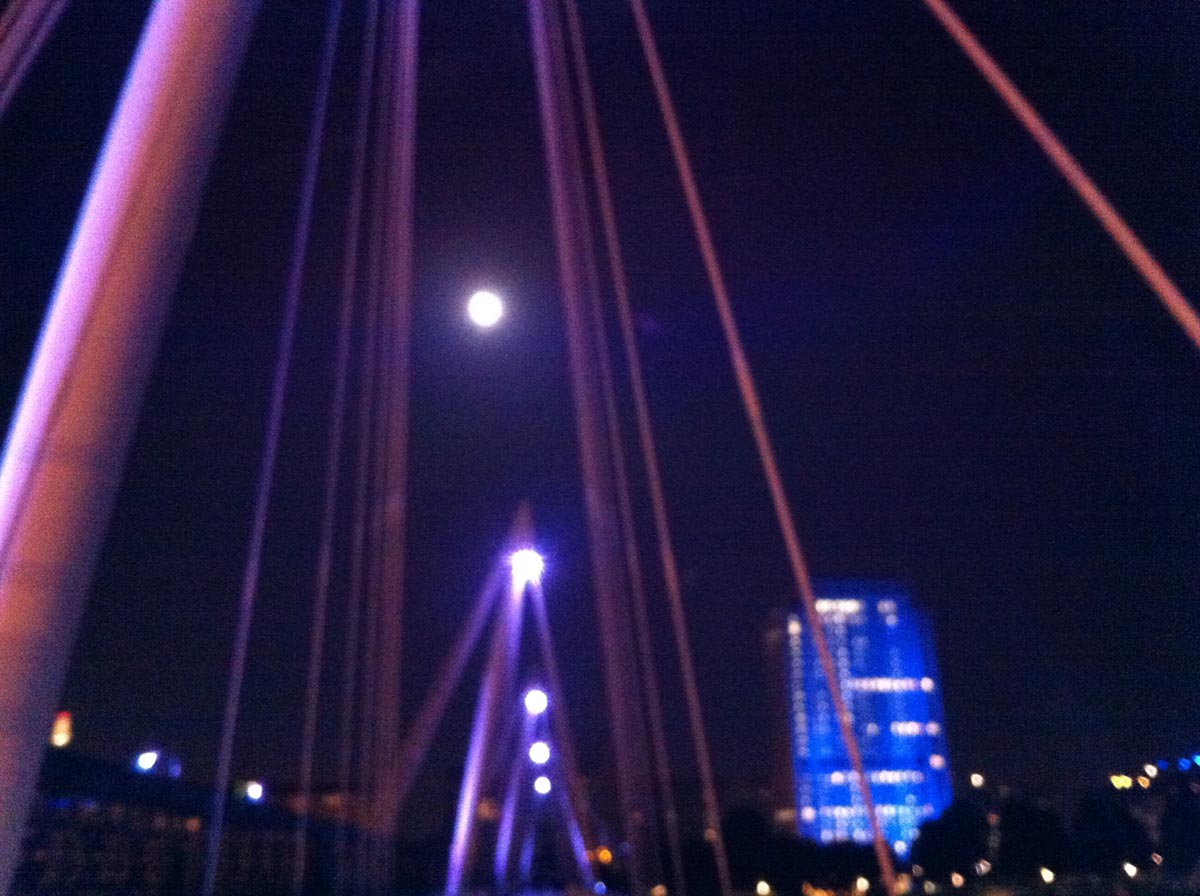 Tuesday 16th July @ 22:39 is the Full Moon and there will be a partial lunar eclipse (in Capricorn) visible at moonrise in London as well as most of the rest of Europe (except the far north), as well as from South America, Africa, Australia and most of Asia. The eclipse will only be seen in North America at the very southern & eastern parts of the continent. At maximum eclipse, well over half the moon will be in shadow. It's the second of two Eclipses which started with a partial solar eclipse on Tuesday 2nd July.

The image to the left shows a Full Moon over Hungerford Bridge, London.

According to London based Astrologer Tanya Cohen "This is a formidable eclipse which will bring everything we’ve been working on, particularly over the past six months, to a head.

With Saturn, Pluto and the South Node (our karmic past) in the mix we’re being encouraged to let go of structures, patterns and fears that may be stunting our growth.  At the same time we’ll have the opportunity to receive cosmic downloads and upgrades to help us enhance our true essence and spiritual wisdom.

With the Sun, Venus and the North Node all in Cancer, emotional liberation and regeneration will be within reach. Bring it on!"

I will be attending a workshop with Tanya on the evening of the eclipse so I'm looking forward to finding out more. There are some further astrological links about the eclipse below.

At the time of the Full Moon the Sun and Moon are in opposition. The solar (sun) energy influences our masculine/yang archetypal attributes (our outer world) such as strength, courage, identity, self-esteem, expression, conscious beliefs and determination together with our logical outlook. Whereas the lunar energy (moon) influences our femininely archetypal attributes (our inner world), such as our unconscious beliefs, hidden emotions, nurturing feelings, creativity and intuition. The Full Moon is a powerful and appropriate time to show gratitude for life and the riches and bounty bestowed upon us by Mother Earth (Gaia).

The Moon shines due to its surface reflecting the Sun's rays. A lunar eclipse takes place when the Earth moves between the Sun and the Moon thereby blocking some or all of the Sun's light from reaching to the Moon. A penumbral lunar eclipse occurs when there is an imperfect alignment between the Sun, Earth, and the Moon; causing the Earth to block some of the Sun's light from reaching the Moon's surface. This covers all (or part of) the Moon with the outer edge of its shadow, which is also known as the penumbra. The penumbra is considerably fainter than the dark core of the Earth's shadow; hence a penumbral eclipse of the Moon is often difficult to distinguish from a normal Full Moon. See timeanddate.com for a detailed explanation.

The Celts had names for each Full Moon of the year, this is the Holly Moon. Holly is an evergreen and reminds us that nature is eternal. The Holly Moon is called Tinne, pronounced chihnn-uh by the Celts, who saw holly as a masculine symbol of firmness. It was used in ancient times to make weapons but was also viewed as a protective wood, hence a sprig in the home is for abundance and safety. See thoughtco.com. No doubt J K Rowling considered this when she chose Harry's wand to be made of Holly.

Anyway, whatever the weather conditions, it's a fantastic excuse to get people of all ages outside in the fresh air and re-connecting with nature. Something our modern lifestyles and obsession with technology can distract us from doing. Weather permitting, outdoor moon bathing can be very therapeutic, simply breathe the silver energy in and out and, if the mood takes you, undertake an outdoor meditation. It’s a wonderful time to put crystals (don’t put out any soluble crystals if it might rain) outside to be recharged by the lunar energy.

Furthermore, whether the eclipse is visible or not, energetically we are all affected. Astrologically, lunar eclipses illuminate our shadow self, as defined by Carl Jung. This can be a challenging experience, as many of us are not keen (or even open) to acknowledging and addressing our faults. However, facing our suppressed emotions (such as anger, jealousy, greed) and confronting our fears provides a great opportunity to move forward in life; past what may have seemed to be insurmountable obstacles. Accepting that we have faults and integrating this knowledge internally is very beneficial for our personal spiritual development.

The Full Moon has a gravitation effect on the Earth, hence leading to a tidal impact on our oceans. Whilst it is has not been scientifically proven, it is logical to assume that this also has an impact on us as we are largely comprised of water (60-80% supposedly).

This particular eclipse with the Full Moon in Capricorn, is especially good for Taureans, Cancerians, Virgos, Scorpios, Capricorns and Pisceans, but it’s more challenging for everyone else. According to moonology.com (where you will find lots more details), the energy is repressed and resigned.

Another site offering lots of practical exercises over an eclipse period is mollyastrology.com. Thanks to Vivien Cottey for supplying these links.

Further energetic aspects are brought in by the lunar eclipse and the numerology of year 2019 which is a 3 year. The number 3 represents optimism, luck, and an abundance of energy.

To the right is a beautiful image of Gabriel by Richard Rockwood from my sister Angel McGerr's A Harmony of Angels book (and Harmony Angel Cards). Both are out of print and collectible but we still have a few remaining new copies signed by Angela (and some unsigned pre-loved editions) via the Harmony Shop.

The time between any Full Moon and the next New Moon is a good time, energetically, to detox the body. In view of this being a elipse, I would say it's an even better time than usual for a detox.

I recommend an oil pulling technique, with coconut oil, which must be from a glass container for best taste.

Tuesday 16th July, being the day of the Full Moon in July, it is also Guru Purnima (the Full Moon of the Gurus) in Hindu tradition. The day of a full moon, Purnima, in the month of Ashadh of the Hindu calendar is traditionally celebrated as Guru Purnima by Hindus. On this day, devotees offer puja (worship) to their Guru. The Sanskrit root Gu means darkness or ignorance. Ru denotes the remover of that darkness. Therefore one who removes the darkness of ignorance is a Guru. It is a day for celebration and worship, a day on which the disciples remember and express their gratitude to the lineage of Gurus. Hindus believe that a Guru is necessary to make one understand the formless Divinity.

Tuesday 16th July is Asalhka Puja Day; a Buddhist commemoration of the Buddha's first public speech to five ascetics. He declared the middle way, the noble eight-fold path and the four noble truths upon which Buddhism is based.