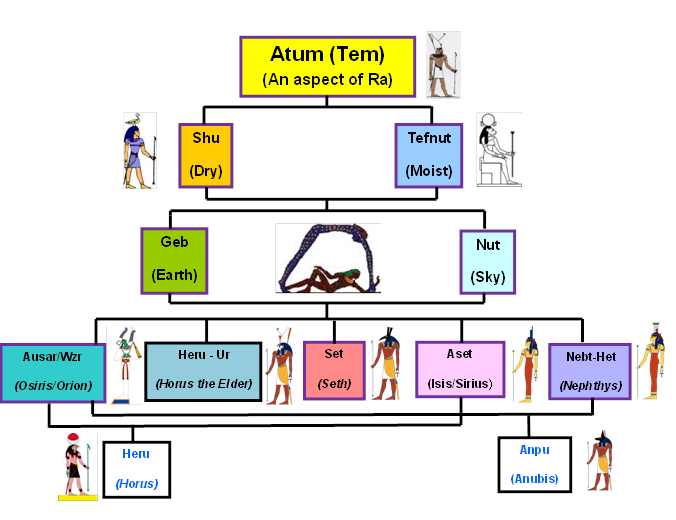 26th July (or 13th July according to some sources) is the Egyptian Eve of the Epagomenal Days; the birthday celebrations for their prominent ancient major Deities. The exact correlation of the Egyptian New Year to the modern calendar is disputed, but I favour the linking with the heliacal rising of Sirius (dawn visibility of Sirius) as this star, known to the Egyptians as Sopdet (pronounced Soppday) was closely associated with Aset. The celebrations began on the Eve of the Epagomenal Days - viewed this year as Monday 26th July. The following days marked the birthdays of the five children of the Egyptian Deity Nut.

Being dates of powerful Egyptian Energies these may prove ideal days for an Egyptian Energy Reyad Sekh Em 1-2-1 healing session.  According to myth, Tehuti (Thoth) enabled Nut to give birth to her five children [Aset (Isis), Ausar (Osirus), Set, Heru-Ur (Horus the Elder) and Nebt-Het (Nephthys)] by using his cunning to win a game of draughts with the moon. By winning a seventy second part of the moon's light, he managed to create five extra days (the Epagomenal Days), which allowed Nut to give birth to her five children without breaking Ra's decree that her children could not be born on any existing calendar day. This myth more than any other is responsible for Tehuti (Thoth)'s role as a lunar deity.

27th July in the Egyptian Calendar, is the Birthday of Ausar. He is also known as Wzr, Wesir, Asar, Ausir, Usir, Usire, Osiris, Osirus. The latter two versions being used later after the Greek occupation, but the variation is mainly due to the lack of vowels in heiroglyphic language meaning that there are many phonetic representations. See the entry under 26th July for the full story.

Ausar is the oldest of the 5 siblings born to Geb and Nut during the Epagomenal Days, he is the Deity of fertility, agriculture, vegetation, the dead, the afterlife, resurrection, life and alcohol. He is depicted with green skin and a pharaonic beard, partially mummified, holding his crook and flail and wearing the atef crown. His consort was Aset (also known as Isis) who co-ruled the Kingdom. According to folklore, the younger brother Set was very jealous, tricks Ausar into getting into a specially made coffin 'to try it for size', then nails down the lid and throws it in the Nile thereby murdering his older brother and userping the throne. Auset finds the coffin inside a cedar of lebanon tree which has grown around it.

She hides the body amongst reeds, intending to return and use her magic to bring him back to life. Before she can do this, Set finds it and dismembers the body into many pieces. Auset searches and collects all the pieces together (except the penis which had allegedly been eaten by a catfish) and uses her spells to resurrect him briefly to create their divine son Heru (Horus), who was postumously born through immaculate conception.  The process of re-membering Ausar is hought to have led to the prototype for mummification.

28th July is the Birthday of Heru-Ur (Horus). This is Heru-ur [also known as Horus the Elder (Gr)], sibling of Ausar and Aset, not their son. Not all sources list him as a sibling, Egyptian mythology widely varies depending on the era and geographical location of the source within Egypt.

He is generally depicted as a Hawk or Falcon headed Deity, although sometimes he is shown as a hieracosphinx; a creature with a lion's body and a hawk's head and wings, with some believing he was the inspiration for the Sphinx in Giza. Heru was viewed as a Sky Deity, whereas Nut is also viewed as the sky in its entirety, Heru's right eye represented the Sun and his left eye was the Moon. He was sometimes referred to as Kemwer meaning the 'great black one' and was later viewed as the patron of the pharaohs and associated with truth and hence also with Ma'at, upholder of the truth on Judgement Day. The movement of these across the heavens was thought to take place as he traversed the sky in his form as a hawk or falcon.

29th July is the Birthday of Set (Seth). Set is also known as Seth (Gr), Setesh, Sutekh, Setekh or Suty which probably ultimately led to the term Satan. He is overlord of the red desert in the south of Egypt and oversees fire, deserts, chaos, disorder, storms, trickery, envy, violence, as well as foreigners! One of his major chacteristics was said to be potent, forceful indescriminate sexual desire with homosexual tendencies.

Yet he is conversely credited for sitting on Ra's solar boat and helping to repel Apep - the serpent of chaos. He is depicted with an animal head which is not readily recognised as any creatures known currently but with an extended curved snout and long upright rectangular ears, he resembles a mixture of a jackal, a donkey and an aardvark (ant-eater). He's sometimes shown with a canine body and forked tail. Apart from his murderous action on his older brother Ausar, Set is additionally known for his battle against Heru as to who should inherit the Kingdom. During their fight, which in some versions goes on for over 80 years, Heru is said to have destroyed Set's testicles whereas Set is said to have torn out one (or in some versions both) of Heru's eyes

30th July is the Birthday of Aset [Auset, Iset, Isis (Gr)]. Aset is responsible for resurrecting her murdered husband and, being mad with grief, uses her magical powers to temporarily restore breath and life into Ausar in order to concieve their son Heru. It seems that her anger, sexual desire and sorrow at his death were instrumental in making her magic effective. After Ausar has fathered Horus, he is only able to live in the afterworld (Dwat or Amenti) where he becomes the eternal guardian. Aset is also thought to restore the souls of deceased humans as she did for her husband.

Her headdress is said to represent a throne. She is thought to be able change herself into a falcon. Aset is said to have one thousand names and to oversee any number of attributes, but she is best known for her association with health and wellbeing, feminine charms, art, music, wisdom, protection (especially children) and sexuality plus of course magical rites.

31st July is the Egyptian Birthday of Nebt-Het [Nebet-Het, Nebthet, Nepthys (Gr)]. Nebh-het is the sister-wife of Set and is typically paired with her sister Aset when undertaking funerary rites because of their protective priestess roles with mummified bodies.

Her headdress depicts a column (sometimes described as a house or a sacred temple enclosure) with a basket on the top. She is sometimes shown as a kite or with protective falcon wings, said to emulate the piercing cries of a wailing moan of the bereaved in mourning. She represents divine assistance and protective guardianship and she is generally considered to be the mother of Anpu [Anubis (Gr)], with Ausar often cited as being the father, not Set. Nebt-Het is Goddess of rivers, the night, service, protection, the home, the hearth, childbirth, mothers, mourning, the dead, coffins and burial.

1st August is the Egyptian New Year as well as the Celtic Festival of Lammas or Lunasa, celebrating the start of the harvest.

By keeping traditions, communities in Ancient Egypt retained a sense of harmony and connection, thereby bringing balance and wellbeing into their lives.

Within Surrey and south London, via Harmony In Nature, we facilitate Forest bathing+ sessions to help adults reconnect with nature and reap the therapeutic benefits (see Forest Bathing+ section of this site on the purple navigation bar above for more about this concept and dates of our events).

Through Harmony Healing, Joanna offers a wider spectrum of events designed to nurture your welbeing. If you are looking for regular spiritually enlightening activities which help to connect you with the lunar cycle, we have our monthly Full Moon Guided Healing Meditations. The next one is on Saturday 10th September, at 7.30-9.30pm (UK time = GMT +1). Participants all receive a deeply healing experience. Cost to participate is £20 by online BACS payment (£1 admin fee added for PayPal) or half price to RSE graduates. Book at the Harmony Shop.

During these monthly session, we connect with other like-minded people and together we work through a mindful chakra balancing process using colours and etheric crystals, with the aim that all participants will experience a degree of unity consciousness. This activity serves as a good taster of my work in general and the virtual format of our Zoom based programme. And, most importantly, it's a step towards making a difference to the global predicament.

To receive regular Blog updates (headed with a title detailing the occasion or event so that you can choose whether to open it or not), featuring New and Full Moon, meteor showers, eclipses and other meteorological events, interesting anniversaries, ancient festival dates plus notification of dates of numerological significance, sign up for the Harmony Healing e-newsletters above or at the top of any page of this Harmony Healing website. The nature of the Blog means that whenever there are several key dates in close succession, there will be frequent mailings. The sender e-mail address is  (and the sender will show as Joanna Bristow-Watkins @ Harmony Healing). You may need to add this email to your safe list and check your junk filter initially.