Tuesday 31st December is New Year's Eve and Hogmanay in Scottish tradition. Many Scots had to work over Christmas because celebrations were virtually banned in Scotland for around 400 years, from the end of the 17th century to the 1950s. The Protestant Reformation led to the Presbyterian outlook, branding Christmas as a Popish or Catholic feast which was therefore prohibited. As a result, their winter solstice celebrations took place at New Year when family and friends gathered for a party and exchanged presents, especially for the children, which came to be called Hogmanay. Historians believe that the Vikings who, coming from even further north than the UK, paid strong attention to the passing of the shortest day and hence may have initiated the post-Solstice celebrations.

There is no definitive view on the origins of the word Hogmanay. Many Scottish words have derived from Flemish, so one popular view is that Hogmanay came from hoog min dag which means 'great love day', whereas the Scandinavian word Hoggo-nott described the 'feast preceding Yule' (itself a Scandinavian word commonly used in Shetland where the Scandinavian influence was strongest).

Alternatively, Hogmanay could source from the Anglo-Saxon, Haleg monath, 'Holy Month', or the Gaelic for 'new morning', oge maidne. Phonetically, a good candidate night be the similar sounding French expression Homme est né which means 'Man is born'. Also, in France the last day of the year when gifts were exchanged was aguillaneuf, though specifically in Normandy presents given at the year-end were hoguignetes.

In Scotland a similar practice to that in Normandy was noted, rather disapprovingly, by the Church.

"It is ordinary among some Plebians in the South of Scotland, to go about from door to door upon New Year`s Eve, crying Hagmane."
Scotch Presbyterian Eloquence, 1693.

Common Scottish practices on 31st December, before midnight, involve a thorough cleaning of the house (including taking out the ashes from the coal fire) plus the superstition to clear all your debts. Immediately after midnight, the long-held tradition to sing Robert Burns's For Auld Lang Syne has now evolved into a popular international custom.

Many areas of Scotland have developed their own local Hogmanay rituals such as the fireball swinging rituals in Stonehaven, Aberdeenshire, in northeast Scotland. Image (left) by MrPurple at English Wikipedia [GFDL or CC BY 3.0] shows the Stonehaven Hogmanay Festival in 2003. Chicken wire structures - filled with old newspaper, sticks, rags, and other dry flammable material  - are attached to lengths of wire, chain or non-flammable rope. When the Old Town House bell marks the New Year, the balls are set alight and the celebrants set off along a heritage route, swinging the burning balls around their heads as they go. At the end of the ceremony, any fireballs that are still burning are cast into the harbour. 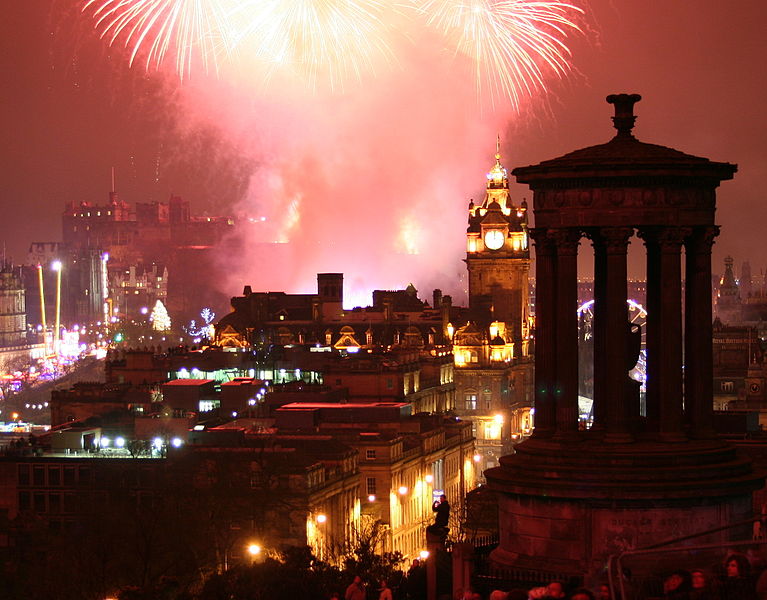 In the Scottish Capital of Edinburgh, they really go to town with a world famous 4-5 day New Year Celebration starting on 28th December and lasting until 1st or 2nd January, both of which are bank holidays in Scotland to allow folks to fully recover!

The Edinburgh festival is centred around the main shopping area in Princes Street where they hold a lively street party.

At the stroke of midnight, the cannon is fired at Edinburgh Castle, followed with a massive fireworks celebration.