Wednesday 1st January is New Year’s Day and is a Bank Holiday in the UK since 1973 (phew, no-one would turn up for work on time if it wasn't) and time for New Year’s Resolutions!  According to Isiopolis, here in the Northern Hemisphere, Sirius (known to the Egyptians as Sopdet, the Star of Auset/Isis) reaches its highest point in the night sky at midnight on New Year's Eve, making it a perfect time to embark on our own personal rites of renewal and reorientation. 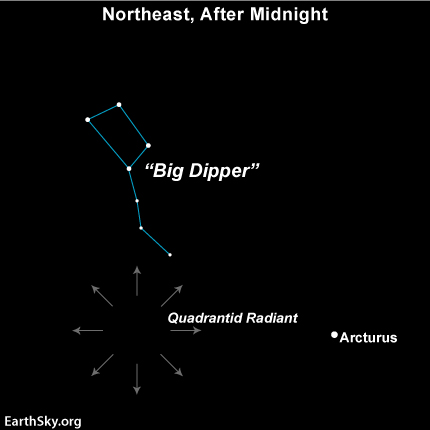 Wednesday 1st – Sunday 5th January (peaking on the 3rd, 4th January) is the Quadrantids Meteor Shower; visible from 1st – 5th January after midnight and peaking in the early hours of the 4th.  Typically, 40 or so bright, blue and fast (25.5 miles per second) meteors will radiate from the constellation Boötes (near the Big Dipper in our sky) not far from Boötes’ brightest star Arcturus; some blazing more than halfway across the sky. The meteors will radiate from the northern sky, but appear in all parts of the sky. A small percentage of them leave persistent dust trains. This shower usually has a very sharp peak, usually lasting only about an hour.

The particles that cause the Quadrantid meteor show originate from the asteroid 2003 EH1 an asteroid that is probably a piece broken off from an obsolete comet. Since the orbit of 2003 EH1 is highly inclined to the orbit of the Earth, the Earth passes through it very quickly. Thus, the Quadrantid meteor shower is an extremely short one, lasting only a few hours. With the recent New Moon on Thursday 26th December, there shouldn't be too much light pollution.  See earthsky.org for more details.

Zikiel guides the comets and meteorites in their eternal passage through space, tracking man's galactic origins. Zikiel therefore offers you a visionary flash of inspiration from the Sky.

If you have a clear quartz, you can programme it with Zikiel's name and keep it with you to help capture any inspirational thoughts channelled from the heavens tonight and also to help your heart to make the right choices.