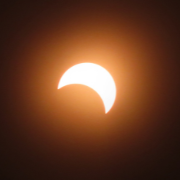 Saturday 30th April is Beltane New Moon.@ 21:30, which is a Black or Blue Moon by the recent definitions, as well as being a partial solar eclipse, although not visible in London. It's also Beltane Eve (see section below).

Several definitions exist for a Black Moon; it's not an astronomical term but has been popularised by astrologers and Wiccan proponents via social media. It can be the third New Moon in an astronomical season with four New Moons or the second New Moon in the same calendar month, as we have this month with New Moons on 1st and 30th. More at timeanddate.com

Traditionally a Blue Moon was when a 4th New Moon or Full Moon appeared in a season where there would normally be three, now it is taken to mean when there are two New Moons or Full Moons in the same calendar month. Because this doesn't happen very often (only if a moon phase happens very near the beginning or end of the month), the expression 'once in a Blue Moon' in the UK refers to something seldom happening.

Even if we can't see much (or anything at all from some parts of the globe) there will still be an effect energetically.  Eclipses can bring suppressed emotions up for examination, clearing and release. Events, which caused ill-feeling at the time, but which have been long forgotten can raise their heads for resolution.

This partial solar eclipse, the first of 2022, is visible from parts of Antarctica, southern South America, over the Pacific and Atlantic Oceans. More about this particular eclipse at timeanddate.com

During a partial solar eclipse, the Sun, Moon and Earth don't align in a straight line, and the Moon casts the outer part of its shadow (known as the penumbra), on Earth. From our perspective, it appears as if the Moon has taken a bite out of the Sun.

The term eclipse magnitude, refers to the size of the eclisped area. Occasionally, the Moon covers only a fraction of the Sun's disc. At other times a partial eclipse can look similar to a total eclipse. More about partial eclipses at timeanddate.com

The New Moon Abundance Ritual should be carried out within 24 hours after the New Moon.

It needs to be after the New Moon because the moon should be waxing (getting bigger again) to carry the manifestation energy.

There are video instructions on my Facebook Page or You Tube Page.

Any New Moon is a fabulous day for creating a personal or corporate Vision Board.

Gardening by the moon has been practised for eons. It's not about planting at night, it's about being in harmony with the natural growth patterns of plants.
The moon progresses through four ‘phases’ or ‘quarters’ , each of which lasts about 7 days. Starting with the New Moon (today), the moon waxes (grows larger) and more visible.
There is a daily increase in light until the Full Moon is visible. After Full Moon, the light wanes (reduces) gradually back until New Moon, completing the lunar cycle. In the same way that the moon influences the rise and fall of the tides, it has gravitational impact on the moisture in plants (sap), the soil and water table. These effects are aligned with the lunar cycle.
For sowing and harvesting, we need to be in harmony with the flow of moisture as it is drawn up the plant into the stem and leaves, fruit and seeds. Or down into the root zone with the gravitational pull of the moon for root vegetables. New Moon is not a good time to plant in your garden.

Aligning ourselves with the moon cycle is very therapeutic, hence being aware of the Full Moon (a good time for bringing projects to a conclusion) and the New moon (good for starting new projects) is excellent for bringing balance and wellbeing into our lives. For full immersion with moon energy join one of our New Moon New Vision, Lunar Cycle Alignment Programmes, which generally run between the New Moons in January/February, April/May & October/November.

Saturday 30th April is the Eve of Beltane; Pagan celebrations begin with people singing and dancing clockwise around the fire. The name 'Beltane' derives from the Celtic Deity 'Bel' (definition = 'the bright one') together with 'teine' – the Gaelic word for fire.

The combined meaning is 'Goodly Fire' or 'Bright Fire', hence bonfires were lit to encourage the Sun to nurture the forthcoming harvest and to honour Bel ask for his protection of the local community.

Cattle were driven between the fires to purify them with the smoke and bring fertility. People jumped over the fire (not the huge ones I presume) to cleanse, purify and enhance fertility.

Couples pledged themselves to each other by jumping the fires together and to bless their union. After the celebrations, which ran from sunset 30th April to sunset on 1st May, the villagers took a bit of the Teineigen to start fresh fires in their home hearth. 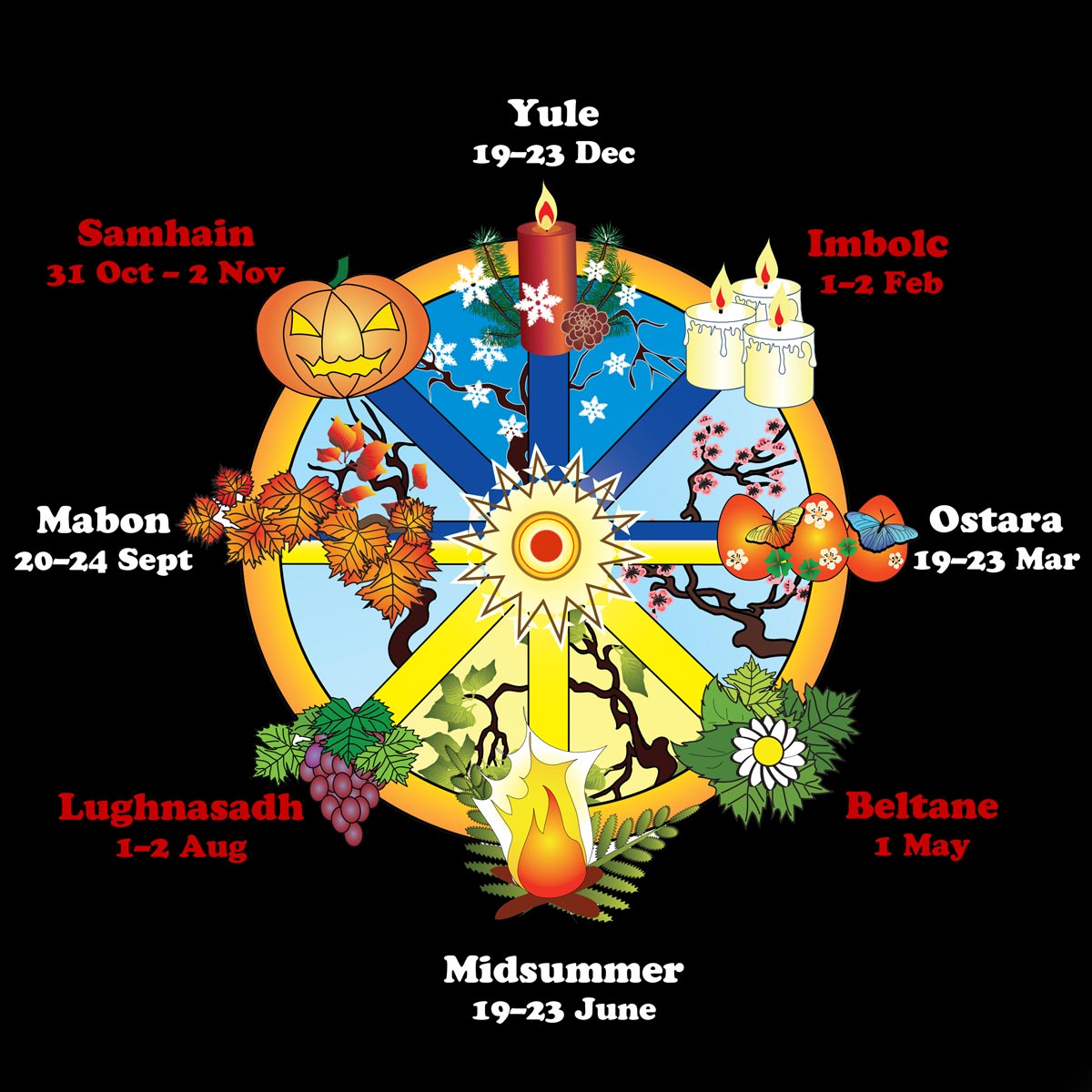 Beltane is one of the four Celtic seasonal festivals; along with Lughnasadh, Samhain and Imbolc - as shown on the Pagan Wheel on the right, courtesy of Shutterstock (licence paid).

Dew gathered at dawn from the grass is traditionally used in potions for luck and it is thought to be lucky to roll naked in the dew!!!  I remember collecting the dew at dawn for luck as an adolescent but I didn't try the rolling naked in the dew so can't testify to whether that works for anything other than risking (indecent) exposure.

On Beltane itself, it's traditional to drink from a well before sunrise, then wash in the morning dew, adorn yourself with greenery, watch the sun come up, dance round the Maypole and otherwise abandon yourself to the season! Round Full Moon Cakes are eaten together with blackberry, elderberry, dandelion wine (or cider) being drunk. Visits are made to sacred springs where healing water is drunk.

Thanks also to Glastonbury-based Goddessandgreenman.co.uk website who also credit Sacred Celebrations by Glennie Kindred as their information source. There are always amazing annual Beltane and May Day celebrations in Glastonbury and a 4-day Jack in The Green Festival is held in Hastings culminating on the May Day Bank Holiday (the first Monday after 1st May).

By keeping traditions, Pagan communities retained a sense of harmony and connection, thereby bringing balance and wellbeing into their lives.

Joanna's Harmony Healing activities - not involving any rolling in the dew celebrations - are aimed at bringing harmony and wellbeing into your life.

Through Harmony Healing, Joanna offers a wide spectrum of events designed to nurture your welbeing and to connect with nature and the moon cycle. We hold monthly Full Moon Guided Healing Meditations, £20. Book at the Harmony Shop.

Harmony Healing utilises the philosophies of the Ancient Egyptians, in the form of Reyad Sekh Em (RSE) Level 1 Egyptian Alchemy Healing. Featuring four online modules of Khemitology (Ancient Egyptology according to the indigenous oral traditions), Violet Flame of Amenti, Mindful Chakra Balancing & Essene Angelology.Missed sessions are fully recorded so that late registrations or are possible. Reyad Sekh Em (RSE) Level 1 costs £266 and run about three times a year. the individual modules are stand-alone and cost either £88 or £66, hence the RSE 1 Package offers a cost saving.

To receive regular Blog updates (headed with a title detailing the occasion or event so that you can choose whether to open it or not), featuring New and Full Moon, meteor showers, eclipses and other meteorological events, interesting anniversaries, ancient festival dates plus notification of dates of numerological significance, sign up for the Harmony Healing e-newsletters above or at the top of any page of this Harmony Healing website. The nature of the Blog means that whenever there are several key dates in close succession, there will be frequent mailings. The sender e-mail address is  (and the sender will show as Joanna Bristow-Watkins @ Harmony Healing).