Wednesday 24th June is Midsummers Day and was considered magical in Cornwall and Ireland, when there was feasting, fires, songs, and dances. Bonfires were kindled on high hills to commemorate the high point of the year. Traditionally, the veil is thin between the dimensions housing the living and the dead at this time.

June 24th was designated as a feast celebration called St John's Day in the Christian Calendar, dedicated to the marytr St John The Baptist. The observance begins the night before as St John's Eve.  It's also commemorated in Freemasonry.

However, Midsummer's Day celebrations long predates Christianity, and has existed under different names and traditions globally. 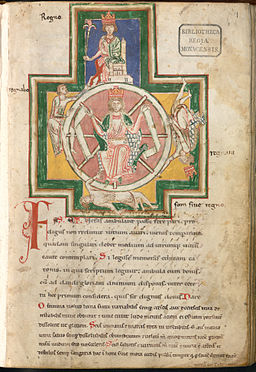 24th June is also the Roman Festival of Fors Fortuna. Fors is an ancient Roman Goddess of prosperity, good luck, and divine blessings. Her name means "She Who Brings", from the Latin verb fero, synonymous with abundance and success.  This seems to have merged with Fortuna, probably originally a Goddess of fertility, into the Goddess called Fors Fortuna, who was acknowledged as sometimes being fickle or wanton and representing Fortune as Goddess of luck or chance.

She was especially worshipped by slaves and commoners, as the Goddess who could bring about rags-to-riches transformations; with at least two dedicated temples in Rome being founded by former slaves in gratitude for their changed luck. It also looks to have been the origin of the phrase Wheel of Fortune.

The image [By Anonymous (Public domain), via Wikimedia Commons] shows how Fortuna governs the circle of the four stages of life, the Wheel of Fortune, in a manuscript of Carmina Burana (Latin for Songs from Beuern; where Beuern is short for Benediktbeuern).

By keeping traditions, communities in Ancient Britain retained a sense of harmony and connection, thereby bringing balance and wellbeing into their lives.

A number of virtual courses are now ready and a selection are starting again this month, including Reyad Sekh Em (RSE) Egyptian Alchemy Healing Level 1 (which is now fully available as interactive training modules) details on Harmony Healing Virtual Events. Currently, due to Coronavirus, most events will be virtual hence distant readings and healings are proving popular. We don't recommend giving a reading or healing to another person, without first checking whether it would be welcomed.

To receive email notification whenever a new Blog is posted  (always headed with a title detailing the occasion or event so that you can choose whether to open it or not), sign up for the Harmony Healing e-newsletters at the top of the page.  Joanna's Blog features New and Full Moon, meteor showers, eclipses and other meteorological events, interesting anniversaries, ancient festival dates plus notification of dates of numerological significance. Sometimes Blogs will appear on successive days and at other times there will be no messages for a while. The sender e-mail address is  (and the sender will show as Joanna Bristow-Watkins @ Harmony Healing). You may need add this email to your safe list and check your junk filter initially.

Forest Bathing+ Newlands Corner
New smaller sessions, £30 each
With COVID precautions observed
Joanna is working with a rota of FB+Guides
Her sessions are as follows: